Flimsies were created as a by-product from the wizard's Snodrog's logic traps which usually resulted in the sudden nonexistence of the person involved.  If, however, the suspect had "[an] unusually strong will, or...[was] not entirely convinced by his arguments," they did not vanish but were instead transformed into a flimsy. In their new form, the linen napkin flapped around as servants of Snodrog (Pedant, 14-5) or "slip[ped] into open windows at night and tr[ied] to smother sleeping people.”

Once he was defeated, "all the people that Snodrog had transformed [into flimsies] found themselves standing in the road outside his house the next morning..." (Pedant, 76-7). This parade of former flimsies contains a number of familiar faces to both Bellairs and the Fitschens.  Marilyn Fitschen says Bellairs never suggested putting people they knew in the parade and was "pleased at his own cameo appearance" which he never saw until the book was published. The characters continue to march onward onto page 78, though most of those names and faces are now forgotten - probably faculty at the University of Chicago, Marilyn guesses.

Marilyn says between Ingle and the Cookie Cutter were two women that were friends of hers but did not know Bellairs. "The only memory I have is the woman pulling the kids is Carole Morriarty, John Morriarty's ex-wife, and his twin sons." 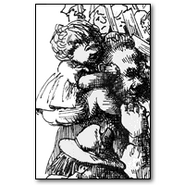 Romy Fitschen, the daughter of Dale and Marilyn, perched upon her father's shoulders. 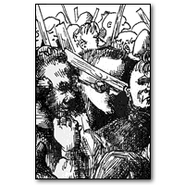 Hidden behind one of the bed slats is Bob Byrne, the best man at Dale and Marilyn's wedding. 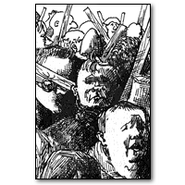 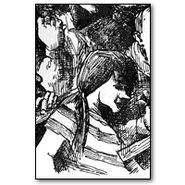 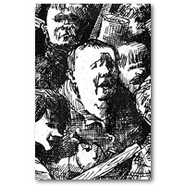 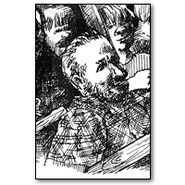 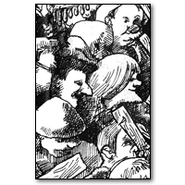 Joe (a poet) and Jill (a painter) Somoza, who were friends of Fitschen's. 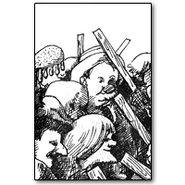 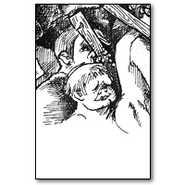 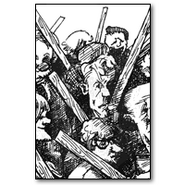 Joe: best described by Marilyn as "someone everyone knew but not very well." 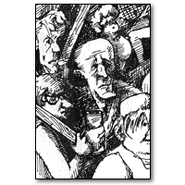 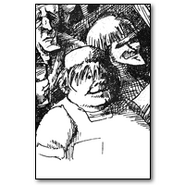 These senseless linen creatures apparently lack any physical strength and have little worth, making flimsy a most appropriate name. The word flimsies bring to mind the furies, the mythological personifications of vengeance in Roman mythology.  And who knew flimsies were another name for bingo cards?

Bowen suggests "gravy and cranberry juice" brings to mind the image of humdrum, average meals: “If you are unfortunate enough to become a Flimsy, you don't even get to carry the stains of exotic food and wine.”

The ability to "slip into open windows" brings to mind the famous M. R. James story, "Oh, Whistle, And I'll Come To You, My Lad", where a professor discovers an ancient whistle at the site of a ruined chapel. Professor Parkins blows it out of curiosity and summons up both a wind and a reverent that invades the spare bed of his hotel room and, at the climax, fashions itself a body out of the sheets:

Parkins...did once describe something of it in my hearing, and I gathered that what he chiefly remembers about it is a horrible, an intensely horrible, face of crumpled linen. What expression he read upon it he could not or would not tell, but that the fear of it went nigh to maddening him is certain.

But he was not at leisure to watch it for long. With formidable quickness it moved into the middle of the room, and, as it groped and waved, one corner of its draperies swept across Parkins's face. He could not--though he knew how perilous a sound was--he could not keep back a cry of disgust, and this gave the searcher an instant clue. It leapt towards him upon the instant, and the next moment he was half-way through the window backwards, uttering cry upon cry at the utmost pitch of his voice, and the linen face was thrust close into his own.

Community content is available under CC-BY-SA unless otherwise noted.
Advertisement