The House with a Clock in its Walls

The Sign of the Sinister Sorcerer
The residence at 100 High Street in New Zebedee, Michigan is the home of Jonathan Barnavelt and his nephew, Lewis, who moves to the house in the summer of 1948 (The House with a Clock in its Walls, 3). The three-story house, dubbed Barnavelt's Folly by its owner, has a tall turret on the front and is full of rooms – some open, some secret – that Lewis continually explores. After his first year in the house and discovering many of its dark secrets from its previous owners, the Izards, Lewis eventually makes it his home.

The exact year of the house’s construction is unknown, as is how many families lived there prior to the Izards. Isaac Izard decorated or “carved or painted or stamped” much of the house with his initials, appearing as the Roman numeral 2: “the wainscoting, the floorboards, the insides of cupboards, the fusebox, the mantelpieces...[even] worked into the tracery of the wallpaper in the upstairs front hallway” (House, 33). By Jonathan’s own admission he had only been living there for about five years in 1948, thereby this putting Isaac’s death at about 1943. Jonathan converted the house’s heating from coal to oil when he moved in (House, 166).

Jonathan later tears out the offending “deep maroon wallpaper with [the] intricate pattern of curving vines that wove around white shields” and replaced it with an “ivory wallpaper with the faint green stripes” (The Tower at the End of the World, 53). Years later during a hallucination, Lewis sees the interior of the house as it existed in the 1940s, including the wallpaper and Isaac Izard himself (Tower, 53).

During Lewis’ first year living there the house was full of various types of clocks (House, 15), particularly one clock that could be heard ticking behind every wall: “up in the attic, down in the cellar, in the closets and storerooms and parlors” (House, 39).

The front door contains a metal-covered mail slot (The Figure in the Shadows, 28). Inside is the front hall that contains a six-foot tall coat rack (House, 25), a seemingly uninteresting piece of furniture used to store coats, hats, and galoshes. A mirror on its front does little more than show a person’s reflection but one day Lewis “looked at the mirror and saw a Mayan step pyramid in a steaming green jungle”; the enchanted mirror is also known to pick up WGN radio (House, 121).

Beside the coat rack is a Willowware vase full of walking sticks and where Jonathan stores his magic cane (House, 52). A nearby closet contains a wide spectrum of odds and ends, including, among other things, ice skates, badminton rackets, and raccoon coats (House, 114). During his first year living in the house, Lewis sees the spirit of his deceased Aunt Mattie here (House, 117).

A nearby front parlor is “more or less unused” but contains red velvet chairs and settes (House, 102), as well as a player organ that enjoys playing its own tunes, such as Rugbug (House, 58), and is known to refuse others (namely Lewis) to play what they want to play (House, 124).

One of the most important rooms on the ground floor is Jonathan’s study, a room with paneled walnut doors (House, 67); high ceilings; walls lined with books; a fat, slouchy, brown-leather chair (House, 30); and a Grandfather Clock (House, 16). The room “smelled like damp paper, wood smoke, and [Jonathan’s] personal tobacco blend” (House, 51). Part of the study is given over to Jonathan’s personal library, with a separate section of the shelves originally devoted to books on magic. A stepladder was available to access books high on the shelves (House, 67). Lewis was originally permitted to browse through all of the books (House, 67); however Jonathan later moved those related to magic to a closest in his bedroom when Lewis began snooping around (Figure, 50). A set of double doors in the middle of one wall lead out to a side yard (Figure, 53).

There is a secret compartment between a built-in bookcase in the study and the china cupboard in the kitchen but it isn’t the most cleverly designed contraption: the latch is on the room side instead of the passage side and therefore offers less-than-subtle entrances/exits (House, 38).

Elsewhere (presumably) on the ground floor is a room with pictures and a round table where Lewis first meets Mrs. Zimmermann and plays his first poker games (House, 10-1); a kitchen, where Mrs. Zimmermann bakes cookies and prepares meals for the Barnavelts [House; 14]; and a dining room, where Jonathan plays solitaire (House, 50).

There are many stained glass windows throughout the house – in unused bathrooms or even set in ceiling – but none is more prevalent than the oval-shaped window “nestled into the back staircase in the south wing” (House, 24). Much like other objects, Jonathan has enchanted the glass and now the window changes on a whim, either random scenes or warnings to its inhabitants:

Much of the second floor contains rooms: “third-best upstairs front parlors and second-best back bedrooms, linen closets, playrooms, and just plan rooms” (House, 24). While many rooms were empty and unused, others were crammed with antique furniture – such as marble-topped tables and upholstered chairs – and each had a fireplace made of marble that looked – “depending on the room – like blue cheese or fudge-ripple ice cream or green hand soap or milk chocolate” (House, 24).

Lewis’s bedroom includes a tall black bed with battlements on the top of the headboard, a black marble fireplace, and bookcase (House; 16), as well as a tall mirror and a hooked rug in the Autumn Leaves pattern that was supposedly made by Mrs. Zimmermann’s great-grandmother (House, 138). A window-seat overlooks the front porch roof (House, 105), and from the floor’s hot air register Lewis can hear people talking in the study below (House, 119).

Elsewhere (presumably) on the second floor is a guest room, where Mrs. Holtz briefly stays (The Doom of the Haunted Opera, 13).

The rooms on the third floor rooms were generally unused and Jonathan has the heat shut off from then to save money (House, 124). Lewis finds boxes of knickknacks here and “wall cupboards you could climb inside of”. One disused parlors had organ, one of the few pieces of furniture that once belonged to the Izards. A dusty spiral staircase leads upward to the cupola room, providing a bird’s eyes view of the neighborhood (House, 159); when lit at night its “little oval window...was set, like an eye, in the bank of shingles at the top of the turret” (House, 9)]. Isaac Izard was known to sit in the cupola room – day or night - and stare at the skies, appearing to take notes (House, 35).

Basement The cellar door is in the kitchen (House, 166) and downstairs Jonathan keeps his flashlight and other tools (House, 125). The Fusebox Dwarf, one of Jonathan’s magical creations, resides here and pops out from behind paint cans to startle people (House, 121; over time this creation eventually faded away (Doom, 40). Over in a dark, sooty corner was the old coal bin (House, 166).

A large chestnut tree stands in the front yard next to a glider (House, 9, 30).

The backyard contains four elm trees at its far end and a birdbath surrounded by a mound of stones (House, 53-6). A dark thicket stands in front of the grove of trees; a bamboo wind chime hangs from one tree. The north side of house has an old mossy rain barrel standing against one of the house’s sandstone walls. A backyard tulip bed contains the skeletal remains of a long-deceased cat named Texaco (House, 58). Jonathan is too lazy to regularly plant flowers but maintains a yearly vegetable patch (Tower, 3) where he ties up corn shocks during the summer (House, 67). A high board fence, installed by Izards, once stood between this house and Zimmermann’s; Jonathan’s tore it down when moved in (House, 37).

Jonathan performs an impressive outdoor ceremony during Lewis’ first year living in the house where he eclipses the moon.

A separate garage exists for Jonathan to store his car, a 1935 Muggins Simoon (The Sign of the Sinister Sorcerer, 118).

The property is surrounded by an iron fence whose front gate is held in place by a shoestring. A sign that spells out 100 in red glass reflectors is also prominently displayed.

The exterior of the house is modeled on the Jeremiah Cronin, Jr. House in Marshall.

An unknown house was used for the exteriors as seen in the 1979 adaptation, Once Upon a Midnight Scary.

Filming began in 2017 at the Parrott-Camp-Soucy House in Newnan, Georgia, for the 2018 film, The House with a Clock in its Walls. 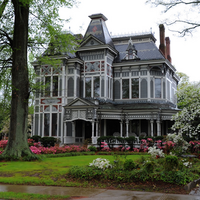 As seen in The House with a Clock in its Walls (2018)
Community content is available under CC-BY-SA unless otherwise noted.
Advertisement